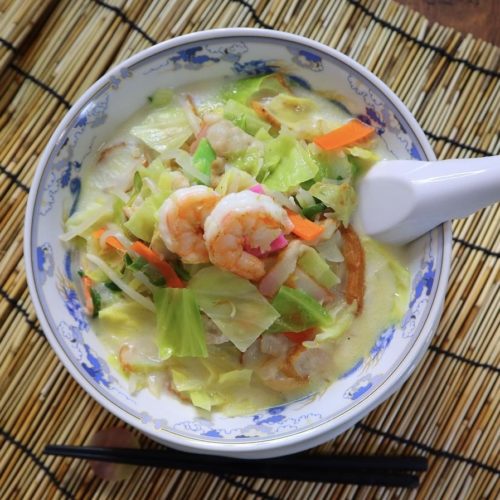 Nagasaki Champon is a regional noodle soup from Nagasaki Japan. One of the most plausible theory suggests that the dish was created based on a Chinese dish at a Chinese restaurant in the city in order to serve Chinese students with cheap and nutritious meals. Now the dish is enjoyed nation-wide. Champon is similar to ramen but it is topped with loads of vegetables and seafood simmered in its broth and the noodles are twice as thick as those of ramen's and have a softer texture. Champon's cloudy broth is typically made by boiling chicken and pork bones for hours but this recipe uses milk to make a cloudy broth, which is a good substitute for the cloudy broth. The dish is ideal when you want to have an easy and balanced yet satisfying meal.
Print Recipe Pin Recipe
Prep Time 20 mins
Course Main Course
Cuisine Japanese
Servings 2 people

Nikusui Udon is a comforting and soothing beef noodle soup from Osaka, one of the major cities and food capita...

Sanzoku-Yaki (Bandit's fried chicken) is a type of Karaage (Japanese fried chicken) originated in Shiojiri-city in Nagano prefecture, which is known for being the location of 1998 winter Olympic games.

When talking about Okinawa cuisine, we should not forget about Goya(bitter melon). And the most popular of all Goya dis...

This is a very simple and super easy yet very iconic Okinawan carrot dish. The term Shiri-shiri refers to the shredding sound of carrots using a Shiri-shiri-ki (Okinawan vegetable shredder).

Singapore has Chicken Rice. Malaysia, Thailand, Vietnam as well. Japan is no exception, but it's not Hain...

Zangi: Hokkaido-style fried chicken This dish started in a city called Kushiro, an important port city in eastern Hokkaido. Unlike other types of Japanese fried chicken, the original version from Kushiro comes accompanied with a Worcestershire sauce based sweet and savoury dipper.